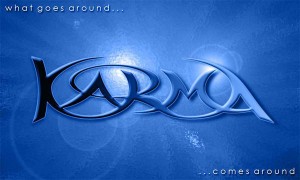 “How people treat you is their karma; how you react is yours.” ~Wayne Dyer

Karma is the spiritual law of “Cause and Effect,” which is also governed by the law of “Duality” due to its dualistic nature of ‘good’ and ‘bad.’ If our thoughts and actions are constructive and accordant, the results will be called ‘good.’ If our thoughts and actions are destructive or discordant, the results will be called ‘bad.’ Karma is governed by duality, yet karma is also the origin of all good or bad beyond human perception since good or bad are merely words which have been created to describe the results of our actions. Consequently, as stated in the blog post of “Illusion and Reality,” ‘karma exists through the micro and the macro, through the law of cause and effect. Good karma and bad karma are only examples of “Duality” based on our perceptions of good or bad, the word karma literally means ‘action,’ which for every action there is an equal reaction as stated in Newton’s laws of motion.’

“For every event that occurs there will follow another event whose existence was caused by the first, and this second event will be pleasant or unpleasant according as its use was skillful or unskillful.” ~Buddha 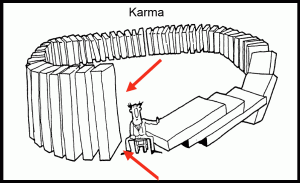 Karma like the “Butterfly Effect,” influences the smallest act of kindness. The smallest act of cruelty sends a ripple throughout the world, and will inevitably return like a boomerang to its original source. Likewise the largest acts of either kindness or cruelty return with even greater force to its source. Karma is the result of all actions of “Duality.” It is a balancing act of events, what goes around, comes around. Whether being ‘good’ or ‘bad’, again karma is another example of everything and everyone being inextricably connected and all being ONE. Separation is only a delusion of our minds, as the Japanese Buddhist Yasutani Roshi said,

“The fundamental delusion of humanity is to suppose that I am here and you are out there.”

Karma is an example of what we do to others and what we inevitably do to ourselves. Since karma can and will settle debts without a whip, sticks or stones, do not mistaken karma as punishment imposed by an external source. We create our own karma as the result of choices that we make every day. Just as karma is associated with the law of balance, karma is nature’s way of finding justice in our universe because karma creates a disturbance in the “Ethereal Substance.” Universal laws and energy are constantly creating balance from that disturbance. When we understand the concept of karma and understand that it is about responsibility, we will never blame others or God for anything that happens to us. Understanding karma will bring the realization that we are responsible for ourselves, not anything external.

“Be not deceived; God is not mocked, a man reaps what he sows.” ~Galatians 6:7

“The mind is like a fertile garden in which anything that is planted, flowers or weeds, will grow.” ~Bruce Lee

“You will never do anything in this world without courage, it is the greatest quality of the mind next to honor.” ~Aristotle

Because the effects of karma coincide with destiny, the causes of karma will coincide with our freewill. Many times in our lives we will come across people, circumstances or events that will unconsciously seek to spread their karma. They will attempt to incite us to incur more karmic debt of our own, due to their own “Ego” and influence of our own with their words or actions. When we don’t react or correspond to the karmic words or actions of others, we break the vicious cycle of karma and we become immune to that particular influence. The cycle ends with us, as Jesus demonstrated with his inner strength and also said;

“You have heard it was said, an eye for an eye and a tooth for a tooth, but I tell you, do not resist an evil person. If anyone slaps you on the right cheek turn to them the other cheek also.” ~Matthew 5:38 ~ 39

“An eye for an eye only ends up making the whole world blind.” ~Gandhi

Perhaps our constant state of chaos in our world is the result of karmic debts that are being collected, as chaos is simply unrecognized order as shown in “Chaos Theory.” Perhaps the term ‘Judgement Day’ is the result of unpaid karma that is due by the end of the Mayan cycle of December 21st 2012? Karma is not good or bad, it is as subtle but yet as powerful as gravity, violate its laws like jumping off a building and you will experience its consequences. It is not gravity or karma that hurts, but the ignoring or not understanding the laws of the universe. The choice is yours! We will always have choice. In the mean time OPEN YOUR MIND!

“Your believing or not believing in karma has no effect on its existence, nor on its consequences to you. Just as a refusal to believe in the ocean would not prevent you from drowning.” ~F. Paul Wilson 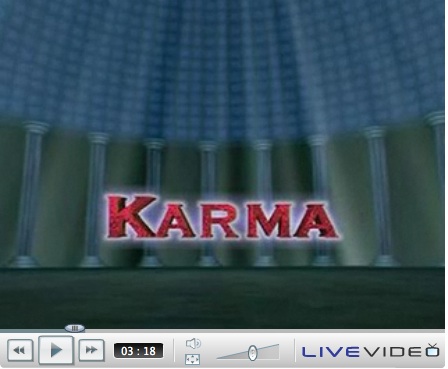