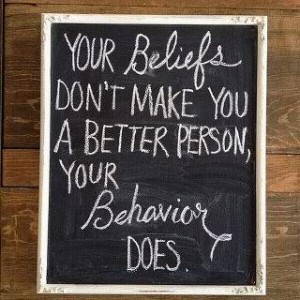 “Religion is like a blind man looking in a black room for a black cat that isn’t there, and finding it.” ~Oscar Wilde

“God has no religion.” ~Gandhi

The story of the three blind men and the elephant is very similar to the perceptions of different religions in regards to God. People get so attached to the beliefs of their religion because of their “Ego,” that many become close minded and fearful of other truths. I’m sure that many have seen a situation where a person hides from Jehovah’s Witnesses that is approaching their door. So I must ask, how strong is your faith and your belief in your religion if you choose to hide? Likewise, Jehovah’s Witness are no different than a blind man describing an elephant. Although, their approach is obtrusive and intrusive. Like a blind man, each religion holds their version of the ‘truth’ because there is a difference between truth and truth. Do you know what that difference is? Like an “Atheist,” many who follow a religion may also suffer from neurosis and cognitive dissonance. Atheism and religion are two extremes of the same “Duality.” However, all religions do have an undeniable component of truth within them. Yet like the blind men none are capable of seeing the complete truth of God.

“Religion is regarded by the common people as true, by the wise as false, and by the rulers as useful.” ~Seneca 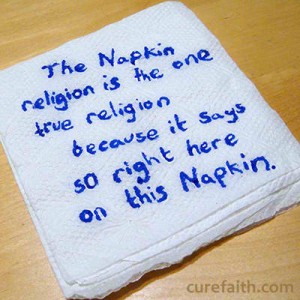 Throughout the history of this planet many unethical and immoral crimes have been committed against life, because of the belief in religion, which is in the name of God. Religion is doing what you are told regardless of what is right! Morality and ethics is doing what is right regardless of what you are told. Religion has actually become a method of control of the human consciousness. An example is Christianity, as it has become an aberration and perversion of what it is to have true Christ consciousness. Christ consciousness is the pursuit of spiritual knowledge and evolution through enlightenment within the self, as physical reality is a physical expression and extension of the spiritual world. Consequently, the Roman Emperor Constantine manipulated and corrupted Christianity for the purpose of control and power, which is the Christianity that many know today. Many will revert to The Bible and say that what they say is true because it’s in the bible. But it is no different than the napkin photo to the right. The Bible is filled with gaps and contradictions, which is evidence of being tampered with! Many people within their religions falsely believe that when a day of judgement comes they will be the only ones who will be saved simply because of their association to a certain religion and not based on their behavior. Is it really as easy as a guessing game of picking the right religion? Again do not be misled, your association with a certain religion has nothing to do with your association of how you relate to your world, to the laws of nature, your environment and ultimately to yourself!

Religion is the masterpiece of the art of animal training, for it trains people as to how they shall think.” ~Schopenhauer

Religions fail to see the entirety of the true meaning of life, due to the dogmatic limits within religion. Religions are merely an organized system of belief based upon traditions of men, instead of the pursuit of a relationship with God. Religion is the exchanging of an internal truth for an external performance, substituting internal spiritual realities with external carnal rituals. Religion is known as the middleman between you and God, dealing with God directly is known as spirituality.

“All religions must be tolerated, for every man must get to heaven in his own way.” ~Epictetus