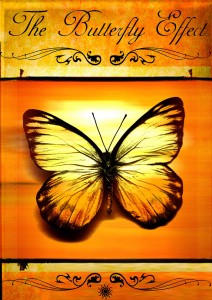 “Never believe that a few caring people can’t change the world. For, indeed, that’s all who ever have.” ~Margret Mead

The butterfly effect is metaphor when presenting various scenarios involving “Cause and Effect.” It is when an event’s storyline goes in different directions or splits at the moment that seems minor, but results in two extremely different outcomes. The term “Butterfly Effect” was coined by Edward Lorenz, who was an American mathematician and meteorologist. In 1961, when Lorenz was working on predicting the weather, he tried to save time by typing the mathematical sequence of the atmosphere as .506 instead of .506127. He was assumed that the .000127 was really insignificant, as it is equal to measuring to a millionth of an inch. After he typed this sequence, he left and let the computer program run. After he returned he realized that the weather outcome was totally different to what he expected it to be. It resulted that the .000127 was what made the difference, which is about equal to the flutter of a butterfly’s wing to our atmosphere. Consequently, it is said that the flutter of a butterfly in South America in the spring will cause a hurricane on the east coast of the United States, over the course of time.

“God does not play dice with the universe.” ~Albert Einstein

As mentioned before in the blog post “Cause and Effect,” there is no such thing as coincidence. A lot of people believe that one person in this world cannot make a difference, which is false. We are all here to see that we can make a difference. If a butterfly in South America can cause a hurricane in Florida or a tornado in Texas, imagine what we can do!

As mentioned in the post “Illusion and Reality,” our physical world is 99.999999999999% empty space. That means we individually need 0.000000000001 to make a difference in the world, which is about equal to human thought and emotion. Since our collective thoughts and emotions create our collective reality, as shown in the posts “Ethereal Substance” and “The Heart,” as far as prediction and prophecy we are a self fulfilling prophecy. From the macrocosm of our world to the microcosm of each individual and to the personal life of each on this planet.

“Act as if what you do makes a difference. It does.” ~William James

Many have come and gone on this planet and have shaped where we are today. From all the perceived “good” or “bad” people in the world, they were all necessary as all good or bad are only a result of “Duality.” There is an endless list of influential people who have sent the most noticeable waves like Jesus of Nazareth, Adolf Hitler, Mother Teresa, Albert Einstein, Pope Gregory XIII, Muhammad, Thomas Edison, Alexander the Great, Napoleon Bonaparte, etc. However even people who seem to be insignificant are all necessary. The butterfly effect is also another example of everything being ONE and everything being inextricably connected to our past, present and future, and to each other and all living beings on this planet. As I write these final words, I understand that my thoughts and action might seem insignificant. However, I have already altered our collective future reality and so have you. As Maximus (Gladiator) said,

“What we do in life echoes an eternity.”

Until next time, open your minds.

“It is from numberless diverse acts of courage and belief that the human history is shaped. Each time a man stands up for an ideal, or acts to improve the lot of others, or strikes out against injustice, he sends forth a tiny ripple of hope, and crossing each other from million different centers of energy, those ripples build a current that can sweep down the mightiest walls of oppression and resistance.” ~Robert F. Kennedy