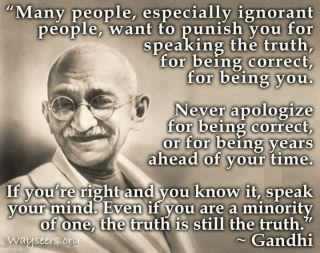 “Three things cannot be long hidden: the sun, the moon, and the truth.” ~Buddha

The most controversial subject other than religion, politics, and money is ‘truth,’ and yet all are a creation from truth itself. The illusion of truth is the reason for all conflicts in the history of mankind. Truth is the reason for all duality, it is the cause of good versus evil, because if something must be right, then by default the other must be wrong. This also describes the conflict within truth and within your perception. It has been said that ‘truth’ will set you free. The irony about truth is that it does not set you free! It actually releases you from one belief and it enslaves you to another. It is like a circle within another circle, as illustrated in the image below. However, the evolved mind has a more advanced understanding of the truth (the outer circle). And the simplest way to understand truth is to understand that your perception is based on your beliefs and agreeable conditions, but does not necessarily constitute truth. 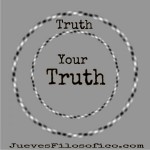 “I would never die for my beliefs because I might be wrong.” ~Bertrand Russell

Many will hate you, despise you and fear you for your version of the truth, perhaps because you disturb the illusion of their reality. They are comfortable within their circle of beliefs and many will fight and die to defend it. As Einstein said:

If you must defend your truth by coercion, you have to understand that it is actually not truth that you defend. It is a counterfeit version of the truth because truth does not need defense. I say in this infinite universe of infinite possibilities to accept everything as the truth, it exists already even if it exists as a thought. Allow everything to be your teacher and be attached to nothing because truth is relative to your enlightenment.

“The only true wisdom is in knowing you know nothing.” ~Socrates