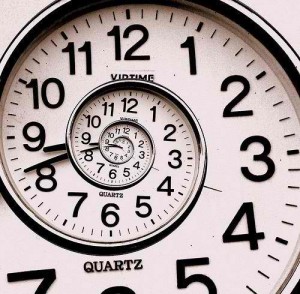 “The only reason for time is so that everything doesn’t happen at once.” ~Albert Einstein

What is time? If you think deeply about the concept of time, it becomes a paradox and a mystery within itself. Does the concept of time really exist? Or is time simply a construct of the mind? Time exists both as a construct of the mind in the infinite form and it exists in finite form as a measurement of motion within a quantitative but infinite universe. That is because the entire infinite universe is merely what exists within the mind, hence revealing the paradox of time. Time is intangible, it is not something you can posses and neither does it posses you, but it’s us that are possessed and enslaved by our own ideas of time. Only through time is how “I am” exists. With time we experience life constantly, persistently repeating itself in a different forms known as the present.

“Yesterday is history, tomorrow is mystery, today is a gift. That’s why it’s called the present.” ~Unknown

It is the belief that our universe is 13.77 billion years old. That is not the age of the universe, as infinity has no beginning and no end. Infinity always was and always will be. It is timeless, it is the Universal Mind also known as God. However, what did happen 13.77 billion years ago was YOU! You, reading this right now! The creation of your soul occurred 13.77 billion years ago. You were the big bang. Everything that exists in the quantitative universe is only a projection of what is within our minds. From the moment of the big bang, to the expansion of the universe to the creation of galaxies and solar systems, they exist within you. Same with the creation of earth, to the creation of man, all of nature, all history known and unknown, all of the wars, all religions. Jesus, Buddha, Mohammed, the knowledge of the wisest, all of the saints and sinners of our planet have existed within YOU! You happened 13.77 billion years ago within infinity, so in our essence there is something inside us that is timeless, our infinite universe is merely a microcosm of God, as we do not exist inside time, we are time.

“Time is the father of truth, its mother is our mind.” ~Giordano Bruno

“Time does not change us. It just unfolds us.” ~Max Frisch