The Story of Our Enslavement II 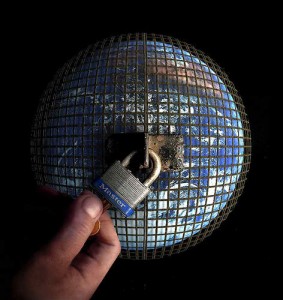 “Necessity is blind until it becomes conscious. Freedom is the consciousness of necessity.” ~Karl Marx

(Continued from… The Story of Our Enslavement ~ Interlude)

There are many people who do not have the need for true freedom. They are so accustomed to a false sense of freedom, which is actually slavery. It is bondage that we are born into and a cage that is not possible to perceive with the limit of our five senses. It is only possible to perceive it with the sense of our mind. We are not aware of true freedom until we become aware of its necessity or until we experience it. However, the knowledge of freedom does not necessarily depend on the physical experience of freedom. As Antoine de Saint-Exupury once said.

“I know but one freedom and that is the freedom of the mind.”

The excerpt from the documentary ‘Ungrip‘explains the situations well:

We have become use to thinking that we have a right to all that we have, no matter what damage we do to the Earth or to other people. We have become detached and disconnected from reality, the Earth, and the feelings and lives of people elsewhere because it interferes with our right to maintain our lifestyle and standard of living. I would submit to you that we’re on a course, leading to inevitable annihilation. Martin Luther King said, ‘The issue is not between violence and non-violence it’s between violence and non-existence.’

Everyone comes to a point in life in which we reflect upon those things that matter. There are some who choose to ignore the depth of this question, and there are others who follow this question into oblivion. Is it possible to walk the middle path? To ask these questions yet embrace the possibility of never arriving at an answer? Is it possible to live our lives not in the absence of a corrupt world, but despite of it?

If you were asked to ponder what matters most in your life, what would it be? Security? Money? Success? Sex? Power? Have you ever considered why? Why we crave? Do we not have enough? What happens when we have all the money, all the security, all the success, sex and power, yet haven’t found peace? What happens if we gain the world without an ounce of love and appreciation? We end up only wanting more!

The world can’t give enough of itself. It’s as if humanity is becoming a black hole, devouring everything in its path. When we receive the things that we desire, our first instinct is to protect them from others. We distrust our neighbors because of them. We wage war to gain more of them. However, love is distinct from these. When love is present, our first instinct is to give back, to help those who truly want to be free, those who desire to give back, who desire to know love. But what happens if no one truly wants love anymore? What if no one desired freedom? What if the greatest epidemic known to man has already infected the entire species? The race of humanity conned into believing that slavery is freedom, that fear is love, that suffering is happiness, would you be able to recognize it if it were happening right now? Ask yourself, is it? Is this the world we live in?

There are billions of people wandering around on this globe with perspective, scope, belief, dogma, morals, fears, desires, and hidden agendas. It’s difficult to comprehend exactly what drives each of them. When looking at the surface of this unique condition, the planet is in due to only one species. It may seem as if we are not truly interested in freedom anymore. Maybe we are not truly working toward growth, prosperity and peace. Again it’s difficult to pinpoint why we are a species of perpetual war and perpetual deceit mashed by perpetual heroism and perpetual compassion. There is no one answer to explain it all, and yet even if there were, it wouldn’t be the intellectual answer we desperately want it to be. The most we can do as individuals is to begin acting like individuals instead of acting like machines on auto pilot from some primal program set in motion millions of years ago. What would this planet look like if we took back the one power we consistently give away, which is choice? There is always a choice, good, bad, indifferent, there is always a choice, love, fear, growth, decay, life and death, there is always a choice, and the picture perfect ending or eternal struggle is but a consequence of the direction we choose to travel from here.

“Your freedom begins when you realize it’s a choice.” ~Pepe Aguilar

Yes, I’m talking about a non-violent revolution of consciousness. A consciousness that is able to understand how we’re are all inextricably connected to each other, and to the Earth itself, and if we violate these fundamental principles we do so at our own peril. Yes, we can continue to live in this delusion and the denials of reality because it’s painful, it’s frightening, sometimes it’s terrifying. It’s terrifying to face the truth, so I ask each of you to search your hearts for your truth. To become a citizen of the Earth promoting justice as a foundation for peace, is not going to happen magically, and I think it’s not going to happen by relying on current political structures and institutions. I think we’re going to have to wage peace in the most extraordinary ways, whether our government wants it or not. You will know in your heart what to do, but I know that without a non-violent revolution of consciousness we will not survive as a civilization or as a planet. We can choose to have peace if we want to pay the price, and what more, glorious goal and value do want than peace for all people. So I look forward to working together with you all, with the people, to build a new society, a society that understands that we are not worth more, and they are not worth less and that we will be willing to pay the price and take the risks to wage peace with all fellow and sister human beings.

“Regard heaven as your father, Earth as your mother, and all that lives as your brother and sister.” ~Native Wisdom