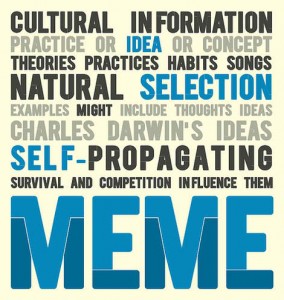 “The first human who hurled an insult instead of a stone was the founder of civilization.” ~Sigmund Freud

Have you ever thought about why people do what they do, speak the way they speak, dress the way they dress, believe what they believe? As Deepak Chopra said,

“Packaged inside every feeling is a tale, I am this way for a reason.”

And that reason is called a meme. A fad fashion is an example of a meme. A meme is an example of the conscious or unconscious acceptance of an external influence that comes from culture. It is also known as a mimic. Language itself is a meme, as the word mimic is derived from the Latin word mimicus or the Greek word mimikos. The word meme is derived from the Greek word mimema, which means something imitated. A meme is the evidence of how susceptible the human mind really is, so I ask the question again, are we living conscious or unconscious lives? Are you aware that you are not aware? Although understanding what a meme is can give a huge insight to human actions, beliefs and behavior. Throughout this post are some pictures of memes, which I must assume that these people taking part in the memes think that they look cool and original. However, they are merely imitating what they think looks cool from an external influence and not from an internal original creation. Being an original is not so original anymore. If someone is not an original then they must be a counterfeit, and a counterfeit is not truth.

“One of the most misleading representational techniques in our language is the use of the word I.” ~Wittgenstein

The 100th Monkey effect may be actual physical evidence of a meme within a species of primate and the meme is within The Matrix of consciousness. A meme is anything that can be copied from one mind to another. A meme is partially responsible for the creation of what we call The Ego. According to the dictionary a meme is an element of a culture or a system of behavior passed from one individual to another by imitation or other non-genetic means. A meme is a form of cultural evolution and a form of belief or a belief system, concept or idea that has a pattern of behavior that spreads throughout a society or a culture, like the duality of religion and atheism. A meme is either spread directly by a cultural inheritance, such as, the patterns of the belief that we have programmed in our subconscious minds that came primarily from our parents, siblings, aunts, uncles, grandparents, etc. Thus when we fear or love we inherently condemn our future generations to our patterns of behaviors through our children, as this was also mentioned in the blog posts Wake Up II and The Unconscious Mind. The second influence is indirectly by cultural acquisition, such as through peers, information and entertainment media. This is the vicious cycle that keeps a meme alive. We are a society of copycats and this is what we call the creation of civilization.

“You can’t say that civilization don’t advance, however, for in every war they kill you in a new way.” ~Will Rogers 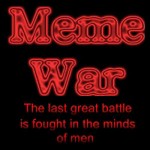 “By all means let’s be open minded, but not so open minded that our brains drop out.”

“God exists, if only in the form of a meme with high survival value, or infective power, in the environment provided by human culture.” ~Richard Dawkins